A Tour Into the Demilitarized Zone of Korea

May 2012 I was off to Seoul attending at the PTCOG 51 conference on particle therapy. Guess I was kind of disappointed, it turned out to be a rather dull seance with poor speakers, minimal discussions, and as usual the poster session was missing.

After the conference I and Linda went for one of the full day tours visiting the Korean demilitarized zone (DMZ) between North and South Korea. Fliers offering this tour are available in most hotels, and the price is around 100 €.

I have been following the North Korean tragedy for several years, YouTube is full of videos documenting their plight, see the links at the end of this post.


Tour concentrated on a region just 20-30 km north of Seoul.


In this region we visited five points of interest (in that order):
Visiting the JSA required a number of precautions to be taken, a few quotes from the leaflet:
A bus picked us up at our Hotel, and as we proceeded towards the north going along the river, where we could see ample amounts of barbed wire fences and South Korean observation posts at regular intervals. As we got closer, the number of guards increased and we saw tank blocks and plenty of checkpoints.

Arriving at point (1) we saw the freedom bridge and a battered train from the Korean war.  And looooooots of tourists. Got about 30 minutes for this part.


Next we progressed to point (2) which was the 3rd infiltration tunnel. Four tunnels in total were discovered, build by North Koreans, three of them can be visited by tourists. According to our guide intelligence agencies suppose more than 20 undiscovered tunnels under the DMZ. No idea if this is really true, though. I thought it should be pretty easy to detect the digging with sensitive microphones or seismometers. Or can one really dig through the granite using dynamite undiscovered? Well..

No picture taking was allowed in the tunnel, but at the tourist site, a nice garden could be seen. Just behind the barbed wire fence: minefields.
The DMZ is approximately 4 km wide with the Military Demarcation Line (MDL) at the middle of it. Beyond the DMZ a heavy militarized area is found, on both north and south side. American and South Korean troops guard the southern side.
The entire area is full of mines. We saw those little red "MINE" tags everywhere. Wonder if some of those mines are exposed due to natural erosion, and perhaps even washed away.. outside of the marked areas? Hm.

The tunnel was rather a rather unspectacular sight. Nothing I really would recommend others to visit. After a long walk deep underground we saw a steel door and some sign marking the MDL.

Next part was more interesting though, we went to an observation post at (3) where  one could look into North Korean territory. A showcase village (Kijŏngdong) was erected to give the illusion of a prosperous North Korea, however reports (Wikipedia) say that village is pretty much dead. The famous North Korean flagpole is clearly visible. Regretfully we only had 20 minutes here, again, tons of tourists, and I was so busy taking pictures, I missed the opportunity to try the installed binoculars. (Requires a 500 Won coin, btw.)
Photography was regulated again, and was only allowed outside a yellow line. As far as I could see this prevented tourists to take detailed pictures of the DMZ cordon. 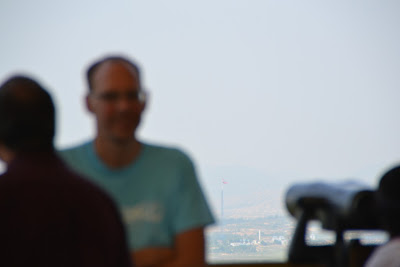 A bit further south of it, yet still on North Korean side, the industrial region of Kaesong can be seen. Established during the years of sunshine policy, using cheap North Korean labor force it was allegedly used for economic development of the North. Sunshine policy ended as North Korea tried to establish itself as a nuclear-weapons state, yet the factory is still active. I saw several trucks going from the North to the South at the Dorasan station.

The tour was getting more interesting as we approached the South Korean Dorasan railway station.

The station is just a few meters of the southern DMZ perimeter. Another mile and you cross the MDL. The station was build with the intention easing the transfer of goods and passengers between the two countries. Since the end of the sunshine policy however this station was only used for bringing tourists from the south to the DMZ. No movements across the MDL.


Finally the highlight, visiting the Joint Security Area. Our passports got checked again and again passing several checkpoints (no photos!), we were transferred to buses driven by American and Korean soldiers (no photos!). We had to leave our belongings behind. I took a hat with me, but where not allowed to carry it in my hands. Had to wear it all the time. We were brought to a briefing room (no photos!) where we saw a presentation on the history of the JSA. Finally we had to sign a "Visitor Declaration UNC REG 551-1", stating that

"The visit to the Joint Security Area at Panmumjom will entail into a hostile area and possibility of injury or death as a directly result of enemy action.(...) Although being on the alert for unexpected condition, the United Nations Command, the United States of America, and the Republic of Korea cannot guarantee the safety of visitors and may not be held accountable in the event of a hostile enemy act."

It also said that

"2.c. Fraternization, including speaking, gesture or any association with personnel from the Korean People's Army/Chinese People's Volunteers (KPA/CPV) side, is strictly prohibited."
"2.d. Visitors will not point and make gestures or expressions like scoffing, abnormal action which could be used by the North Korean side as propaganda material against the United Nations Command."
"2.f. (...) In any case, there is no drinking alcohol and who is not sober for 12 hours prior to the tour will not be accepted."

After that we were forming a line pairwise, and we were let into the central UNC building, which pretty much is a shabby old makeshift shed.

Inside the UNC building you are allowed to cross the MDL, technically being in North Korea then.


The entire tour didn't last long, after 15 minutes or so, we marched back to our buses.
Back on the JSA bus, we had a quick drive around the JSA side, visiting also the "Bridge of No Return", where the MDL is somewhere on the middle of it. The legend says, anyone crossing the bridge would never return, therefore the name. The entire JSA and even the DMZ is a large natural wilderness, with many rare species after nature was left by itself in the minefields for decades. I was astonished how few clear lines of sight you had while moving in the DMZ or even the JSA.

Surely, this was the most interesting part of the tour. I flirted with the idea of actually doing one of those arranged North Korean tours which are becoming more and more abundant. However, I must admit, facing 5 days of massive Juche propaganda, putting down flowers at the dear leader and watching an endless list of showcase tourism spots, is a kind of a turnoff.
Guess I had enough for now, in this case I may leave the traveling to others, there are plenty of interesting Videos about North Korea I can watch instead. Here, a few links
That's it for now. More pics from Seoul (and the DMZ) can be found here.